Myfanwy (Muh-van-wi) is a Welsh girl’s name, from annwyl (“”beloved” or “sweet little one”). Myfanwy is also the title of a hauntingly lovely Welsh folk song; which, as sung by Welsh massed male chorales, moves my back to shivers and my eyes to seep. 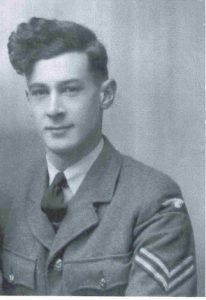 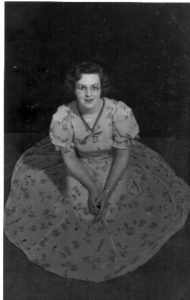 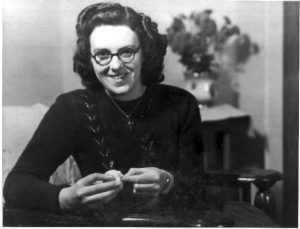 My parents married in 1947 at Shiloh chapel in Tregarth, North Wales. My father, an Englishman, had spent much of his pre-war life in the nearby city of Bangor. He was a Sergeant in the Royal Air Force. Their eldest son, I was born close to a RAF station, in a house called Hope Villa, in the hamlet of Market Lavington, in Wiltshire. My brothers David and Howard soon followed. For a few years, our family lived at air stations in Wales where I learned Welsh at nursery school and at home. My mother never stopped singing and speaking in Welsh even when the family moved to London in 1953, after my father was demobilized from the RAF. My brother Christopher and my sister Angela followed in the late 1950’s. 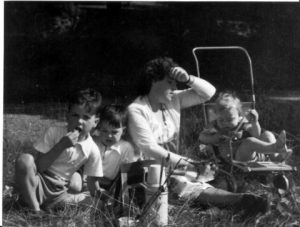 We were a forcefully Christian family. I recall four trips to church on Sundays: morning Sunday School; morning service, afternoon Sunday School and evening Service. We went to Newton Avenue Baptist church because my father’s wartime friend and hero was the pastor at the church. I watched my mother being baptized by this preacher. Surrounded by people singing rapturously, he suddenly dunked my mother backwards under the water of the baptismal pool, which being usually hidden under the church floorboards was mysterious. Her immersion was a terrifying sight for me – one that I have never forgotten.

Newton Avenue was a long walk – I think my lifelong love of walking started as a child because of the constant churchgoing, but if so, it is the only enduring benefit that I can think of for the religion pumped into me as a child.

My father was a brilliant engineering technician in the research department at a local firm. My mother did not work and it must have been tough going for my parents. It was not easy for we children either, since my parents were strict and there was no ban on capital punishment. 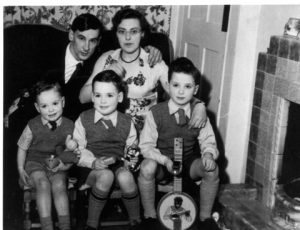 There were many stresses for my parents. The difficulty became apparent about the time I entered secondary school at age 11. My mother suffered a nervous breakdown and was hospitalized for months at a place called Shenley. I hated the name of the place. My father would talk about electrical shocks and cold baths treatments. Nain (Welsh for Grannie) – my mother’s mother) came to look after us. She was strict and religious but her visit had some rewards. She taught me to eat eggs, which I loathed, by scrambling them. In return, I introduced Nain to JRR Tolkein’s Lord of the Rings, which enchanted her because the Middle Earth elven language has a cadence like Welsh.

By the time I was 13, our family life was shredded. My father searched for ever-stricter Christian doctrines and was lay-preaching on street corners and canal tow paths on Saturdays. Beatings became more frequent; missiles and shouts were thrown. I became braver in fighting back on behalf of myself, my siblings and my mother. The next door neighbors sometimes called the Police. Eventually, my parents separated- my father blaming Satan for ruling in his house.

With the separation, Peace came unto the land. We listened to Radio Luxembourg, a commercial European radio station with loud, previously-forbidden (for us) pop music. We watched television. My banned grandfather John Clement Griffith visited, bringing my Mother cases of demon drink – hard apple cider. My mother would dance with us to the sound of the Beatles, who she loved. She borrowed cigarettes off my brother David and I. And she continued a long love affair with Fred, who had been the gas meter reader. Fred would visit and take her on his motor bike to dances and tease me about girls and sex.

We had little money but there was often joy in the house. My mother was fiercely proud and refused the County Council’s support, even when the welfare officer, a fellow Welshman, told her that it was OK to take the money. Instead, Myfanwy worked. She cleaned other people’s houses in our neighborhood; and she learned to be a silver service waitress at banquets. I went along a few times with her to Bar Mitzvahs and wedding receptions. I liked it when the old men would flirt with her. They found her attractive: she was petite, curvy, feisty and witty.

I was the man of the house for a few years. I had Friday evening, Saturday and summer jobs throughout from about age 11 or 12 until I left school. The money was useful for the family. Because I grew up so fast, my mother pretty well let me do whatever I wanted. All she asked was that I be truthful and honest. It wounded her when I got into trouble with the Police. 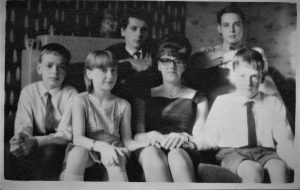 Mum told me that I could stay out all night on weekends if I wanted, as long as I told her that I was going to do so. But my friends seemed to get such a kick out of sneaking out of their homes when their parents had gone to bed, I had to try it too. One Saturday night, I came home about 11 pm and went to bed – only to skulk out of the house an hour later to go party with friends. The next morning at dawn, my mother intercepted me at the front door and told me not to come back until that evening. She was angry at me for my deceit. I never tried that stunt again, and preferred to get home early on Saturday nights if there was going to be challenging homework to complete on Sunday.

My mother was happy when, at 17 I fell into first serious love with a girl she liked very much. I settled down a bit. She was very disappointed when the relationship ended a year later (I suffered more, though)

My mother and I were good friends, so when I turned 18 in July 1966 and left school to find a job, she reasonably asked me to find a room nearby. I was welcome to come by for the Sunday roast “dinner” (lunch).

In early 1967, my father and mother reached a knotty place in their divorce proceedings and I  suppose now that she either agreed to leave the house, or had to leave. About the same time Fred died of cancer. My mother was devastated, losing her home and her lover who was a warming, funny influence in her life. Fred’s wife lost him, too.

By early March 1967, she had moved with my four siblings to Southall, a community some 5 miles west of Acton, where we lived. This was an area remote from her friends and was wrenching for her and her children. Her new home was a Council house (provided by welfare agencies) and agreeing to live there must have been a severe blow to her pride. I visited many nights, although it was a long trek by public buses.

One night we argued. She was very unhappy about the house. Too, I had plans to move soon to Canada and was waiting for my visa. With the loss of Fred, my emigration was a difficult prospect for her. I recall leaving that night bad-tempered and impatient. Striding quickly the few steps from the front door to the street, I heard her calling after me from the doorway: “Good bye Emwnt” (my Welsh name). Something about her voice made me turn around to look at her but being angry with her, I said nothing and resumed walking.

I was awakened a few hours later, on March 7, 1967, by my landlady knocking on my bedroom door. She was dour about being woken up. The Police were downstairs and wanted me to go with them in their squad car to Southall.

My little sister had found my mother slumped in a chair. Swallowing sleeping pills, my mother had killed herself.

It was about dawn and all I could think to do was for the five of us to walk, as we so often did when the three youngest were babies- exploring new streets miles away from the clamor and Christ at home. That horrible, shattered morning our stunned walk ended at the home of a close friend, where we received tea, toast and anguished sympathy from her mother.

And it was as a family that we watched the burial of my mother a few days later, in unconsecrated ground at Greenford Cemetery. I lined the five of us beside the grave: Edmund, David, Howard, Christopher and Angela. None of us cried because I told us not to. My mother’s sisters and brother lined up on the other side of the pit. We watched my uncle yelling hatred at my father across my mother’s grave. It was many years later that her grave was marked with a headstone. I don’t think I have seen it.

It was years before I cried over her death. My eyes seep now as I finish this story.

Although I have never before written of my mother’s death, the impetus of her suicide propelled me to celebrate living by cramming in as much adventure as I could into my own life. Myfanwy, beloved, would have been proud of me.

Ed Medley has been on a random walk for over 50 years. Many scribbles and snapshots at this site are from his vagabond transits; others are from his decades of international experience in geological and geotechnical engineering, academia, and mineral exploration prospecting.
View all posts by Ed Medley →
This entry was posted in Family/Friends, Olde History. Bookmark the permalink.